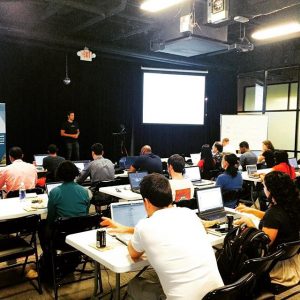 Teaching a web pages for beginners workshop at Digital Crafts

In 2001, a high school friend in our library computer lab introduced me to the Harry Potter fan page and role playing game she build on Geocities. I was shaken by the idea that I too could publish content on the world wide web for everyone to see. Little did I know that 17 years later I would have built a long career in internet software and technology.

I accelerated quickly. By the time I was studying engineering and computer science at Georgia Tech, I had already developed, managed and implemented web-based applications for enterprise clients including NBC Universal, the US Military/3rd Army, and the NFL Network along with small and medium businesses in the media, medical, construction, banking, aviation and academic fields.

Through my own experience and academia, I gained expertise in a long list of programming languages and systems, but I have a special affinity for the LAMP stack, clean user interface and shrewdly optimized database queries, algorithms and data flow.

Also a licensed pilot, I lead the technology efforts as CTO of entrepreneurial upstart ImagineAir. Grueling yet rewarding work grew the company from a 3-aircraft $500K operation to a 15-aircraft $8M company.

In addition I joined on as CTO and senior programmer for Fitness Interactive Experience while also moonlighting as a lecturer and software development instructor at The Creative Circus in Atlanta.

In my spare time, I work on a list of adrenaline pumping skills including skydiving, flying planes, caving, rappelling, scuba diving, rock climbing and snowboarding as well as the playing of the piano and tasting of as many dark rums (and Belgian beers) as possible, although I’d like to stress… not all at the same time.

My schnauzer Tucker is around most of the day, but despite being a constant presence has failed to learn programming despite my best attempts.