Being part time devops in a small shop can limit the time (and money) you spend load testing a web application or server API. And yet if you’re publishing a consumer application with the hopes of growing your user base, it’s important to keep your finger on the pulse of your infrastructure. So how does a stretched dev team decide when to scale or optimize before the whole house of cards comes crashing down? 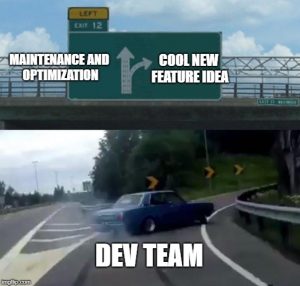 There are a lot of right answers, even better ones than described here (ie auto-scaling server groups), but for now we have EC2 instances and a pretty bomb monitoring tool provided by our friends at Amazon. Along with an unlimited supply of Diet Mountain Dew, our stretched devops person needs to work with what’s been given to them.

Setting up pre-defined and existing metrics and alerts in Amazon is pretty trivial. Its a table-stakes measure for a team and a good start. Since there are a ton of resources available on the procedures, we’re going to skip straight to strategy. If you need some white papers, Amazon’s are so far, the best.

Anecdotally, our application suffered some common modes of failure as it scaled. The most common were:

Enter some basic graphs. CPU utilization and network traffic are a good start. They should show highly proportional changes during normal usage. We set up alerts for when usage peaked above a certain threshold (~75%).

These aren’t the only graphs we set up for our infrastructure, we have MySQL/Aurora and Dynamo usage graphs, queue server and queue size monitoring as well as network and load balancer monitoring. These are all great, we have a pulse, we can monitor trends and we can get alerts when things start going amiss. But we still don’t understand really how many users  our servers can support… 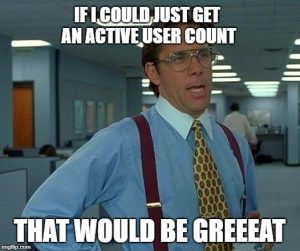 Our native mobile game connects to one of many node servers, who process and return data during the user session. In a glorious moment, the dev team delivers an API endpoint which returns a local and global count of connected users on each server. We’re almost there, let’s get that into Cloudwatch too!

To do this we need three things: our chopping block, machete, and the AWS custom monitoring scripts handed to us above. Since Amazon’s team has done the heavy lifting for us, there’s no reason to reinvent the wheel, but as you are about to see, I AM NOT A PERL DEVELOPER. This was my first foray into Perl scripting, I needed to accomplish pulling the necessary pieces from Amazon’s script and include a CURL/request library to contact my server API. I also added a snippet to run an operating-system level TCP connection count (line 152). If this file is confusing I’d highly recommend reviewing the original monitoring scripts package first.

This new file (mon-put-user-data.pl) is designed to live in the same directory as the existing aws examples (mon-put-instance-data.pl):

View the script on Github.

Lastly, as with any custom monitoring script, a CRON job has to be installed to run the script on a schedule… mischief managed. With the metrics being sent, we can now access them in Cloudwatch and add them to some graphs, measuring active users against resource usage! 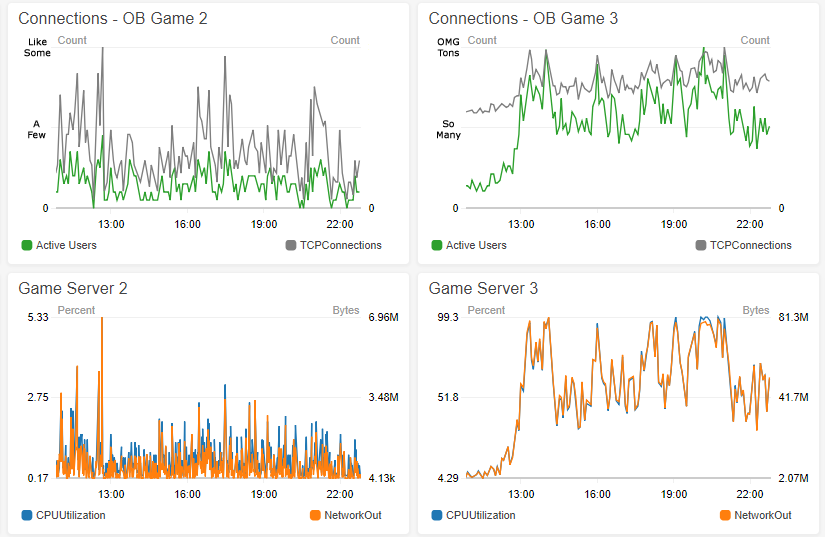 Looks like its time to take action on server 3. We have a few options available, from growing the instance size to better distributing the user load.

This opens up a variety of metric and devops KPI options including estimating how much a single user costs to support in infrastructure and lets us predict and project resource requirements at various growth rates. In the end, this is just one approach… the tip of the iceberg in terms of infrastructure strategy. But for a small shop, a single devops guy and limited resources, its invaluable insight to keep servers running and business growing.

Stay tuned, I’ll add devops posts as we continue to refine our strategy.

Up next: optimizing at the application level to improve per-user cost.

(apologies for the raw dump, keeping this for myself for posterity) Error: (intermittently) Warning: mysqli_connect(): (HY000/2002): No such file or directory in {} on line # Suspicions: – MySQL hitting a resource or connection limit Read more…

Using a text file and cleverly evaluating byte counts, we can create a fairly smart base for a chat powered by a simple JS front end and PHP back end. Using jQuery and bootstrap, the Read more…

Factory Patterns in PHP and Python